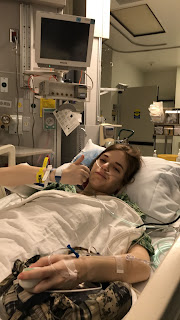 Hi I'm Kayla and I have a pacemaker for my stomach.

I bet most of y'all didn't even know they made those.  Well neither did I until late last year.  Around the same time my neuropathy began improving, my stomach died, because of course it did.  No really it just up and stopped stomach-ing.

I got referred to a Gastroenterologist and got what is affectionately known in the medical field as a "double dip" (aka a colonoscopy and endoscopy at the same time, aka they stick a camera up your butt and down your throat). Lovely.  That showed nothing so on to the next test: a smart-pill endoscopy to show my small intestine.  I literally swallowed a camera while it was flashing.  It never made it to my small intestine, it just sat in my stomach for 12 hours.  From this I was diagnosed with Gastroparesis.  That translates to stomach paralysis. 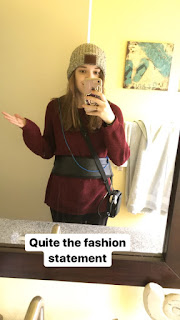 (Lemme just say that after all these gastrointestinal tests, I have consumed my fill of disgusting liquids for this lifetime; good Lord, there has to be a better way to clean out your bowels or consume contrast for a CT.)

I was referred to Motility Specialist at USC.  They have a whole Gastroparesis center over there so they were incredibly helpful and full of options.  Once my stomach died, I unintentionally lost 35 pounds in less than 5 months.  It was insane.  I couldn't eat anything besides baby food and frozen yogurt, and I could barely keep down water.  I was malnourished and essentially starving to death.  I ended up in the ER for fluids because I was so dehydrated, then the USC doctor prescribed at-home saline infusions so I got 3 bags of saline per week since I couldn't consume enough water orally. 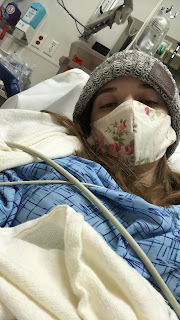 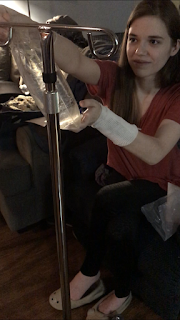 I got a Gastric Emptying study to confirm the Gastroparesis (in this test you eat a radioactive egg and sit around for 4 hours... fun!).  Once that test came back, I was scheduled for surgery to implant a gastric pacemaker/neurostimulator and in the same surgery the doctor performed a pyloroplasty which opened up my pyloric sphincter so food could empty from my stomach more easily.  The surgery lasted 4.5 hours and was performed by a robot which is pretty cool actually.  The recovery was not so cool.   I ended up spending 2 nights in the hospital, during which I broke my non-vomiting streak of 12 years.  I literally hadn't vomited since I was 8 years old.  All that work went down the drain.  Anyway we spent a few months fiddling with the pacemaker settings and 7 months later it's finally manageable.  I now go in to see my surgeon bimonthly to get the pacemaker checked and to adjust the settings.  I will have to get the batteries changed via surgery every few years, but for now I'm doing ok.  At least I can consume water orally. 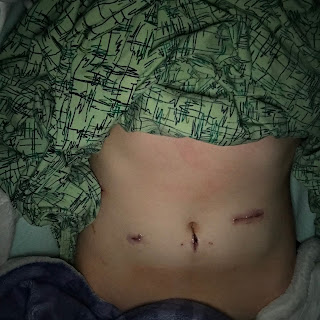 OK I'M FINALLY DONE WITH POSTING PARTS OF MY JOURNEY AND NOW I CAN POST MORE INTERESTING STUFF! Thanks for sticking with me through all these parts I just wanted to split it all up in easy-to-read portions but also keep it all together in terms of uploads.  I can't wait for you all to see what cool blog posts come next!
at December 05, 2018