How Chronic Illness Has Empowered Me

- April 11, 2019
For the first year and a half of my chronic illness journey, I did everything I could to keep my illness a secret.  I thought that if I could just get a diagnosis I could get better, get back on track with my life, and no one had to know I was ever sick.  I spent that whole year and a half planning out how I was going to reorganize my future after I bounced back from what I thought was just a momentary setback.  I mapped out my college education so that I could still graduate the year I was supposed to, I continuously messaged my old boss telling her I just needed a few more months off in order to get better, and I mentally changed my desired career path at least 10 times.  I was so ashamed of dropping out of college that I tried to take one online class per semester, just so I could say I was studying something.  I did everything I could in an attempt to hold on to some sense of normalcy.  I was in denial about the decline of my body, and in my mind, the worst case scenario was people finding out about my illness, and judging me for it.

Growing up, I had never experienced a situation in which sickness was incurable and chronic.  All I ever knew was that if you get sick, you go to the doctor, and you get better.  That's all society taught me.  So when my personal experience didn't line up with that, I saw my situation as abnormal and unnatural.  It certainly didn't help that my doctors were telling me it was in all in my head.

After a year and a half, it finally became evident to me that I was not going to get better.  Not all the way better at least.  Not "better enough."  I slowly began to come to terms with the reality of my situation.  I realized that my life could never be the same as it was before I fell ill, and this realization was absolutely devastating.  I was only 19 and my entire future hung in limbo.  Everything was completely out of my control, and I was at the mercy of my illnesses.  I began to understand that if I didn't adjust my way of thinking (which was the one thing I had a semblance of control over), I was going to be miserable for the rest of my life.

I essentially had become too ill to care what people thought anymore.  I reached a point where I simply had bigger things to worry about than hiding such a huge part of my life.  I had been making myself miserable for a reason that no longer seemed worth it.  So I began telling everyone about my illness.  I shared my life story with anyone who would listen.  I refused to continue feeling ashamed of how far I had fallen, and I became proud of my strength in what I had been enduring.  Perhaps that's a silver lining in chronic illness.  Your priorities end up changing for the better.  You learn to put your mental health above the opinions of others.

Once I started living my truth and being open and honest about all of my experiences, my mental health improved significantly.  I felt free of the pressure of needing to be liked.  I felt free to be my authentic self.  Chronic illness breaks us down in such a way that the strength we exhibit in getting back up is nothing short of admirable.  I possessed so much more strength than I ever thought possible, and I began to take pride in that.  As my illness continuously tore me down, I always found a way to build myself back up.  I relinquished control of my body and learned to take control of my mindset.

Chronic illness is certainly destructive, but through it we come to recognize the power that lies within ourselves.  Now, instead of blaming myself for what I haven't accomplished, I feel empowered by what I have overcome.

Popular posts from this blog

- March 06, 2019
No man is an island... unless that man is chronically ill.  Chronic illness makes islands of all its victims.

I'm going to be honest here, I don't know how to cope with the loneliness that accompanies chronic illness.  It is so gut-wrenching and all-encompassing.  It's not just the literal state of being alone, either.  Along with the physical solitude comes the mental.  I could be in a room full of people and still feel utterly and hopelessly alone, because everyone in the room is able to function so seamlessly while I'm trapped in a cage of my unreliable body…
Read more 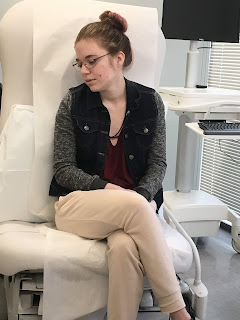 There are days when I feel absolutely worthless. Days where I contemplate the reality of my life, and seemingly everything comes up short.
Let’s go through the list of disappointments, shall we?I am a 21 year old 3-time college drop out.I have maybe one semester of college completed, and most of those units come from AP classes I took in high school.I haven’t had a job in 3 years.The only job I’ve ever had was dressing up as a princess for kids birthday parties so my overall work experience is lacking.Last summer I tried dogsitting for two weeks and I got so insanely sick from it that my parents had to take over because I collapsed in my cousin’s driveway and literally couldn’t move for 3 days. I have zero income. I applied for Disability benefits and was denied because I never held a job that paid into social security.Isn’t it dumb that I can’t work due to being disabled and I can’t get Disability because I haven’t worked?I haven’t driven for 7 months.I volunteered at a hospital last…
Read more

The Complexities of Having Able-Bodied Friends

- July 14, 2019
Being disabled and being friends with able bodied people is way harder than anyone realizes.We’re constantly being left behind and overlooked. As they move forward in their lives, we have to sit back and watch them go.No one wants to admit it, but it gets really hard to be happy for them after a while.They graduate college, awesome!we’re stuck in bed in pain.They get their dream job, great!We’re stuck in bed in pain.They get married, nice!We’re stuck in bed in pain.They drift further away the more they accomplish.It’s only natural.They get busy and they get tired of hearing about your doctors appointments.They stop asking how you’re doing because they know it’ll be the same answer as always.Then suddenly the things they complain about make you roll your eyes.The occasional headache, an annoying coworker, a pulled muscle, their husband snores… but they have their health, and they’re taking it for granted.It’s infuriating. It’s gut-wrenching. It’s heartbreaking.We are losing them.

Chronically Kay
Kay is a 23 year old hot mess whose body is riddled with all sorts of chronic physical and mental illnesses. She's a three-time college dropout and an overall disappointment to herself and others. She's recently taken up writing and (gluten free) baking as outlets for her inner sadness and rage. If you can't already tell, she uses dark humor as a coping mechanism. If you like what you read and want to know more, find her on instagram and facebook @chronicallykay, or on twitter @chroniccandor. (Autonomic Neuropathy, Postural Orthostatic Tachycardia Syndrome, Endometriosis, Small Fiber Neuropathy, Gastroparesis, Ehlers Danlos Syndrome, MCAS, Chronic Migraine, Occipital Neuralgia, Panic Disorder, and PTSD.)